Some Basics of Lubrication

Posted on July 9th, 2018 by f8media in Uncategorized

FRICTION – In any study of lubrication, it is necessary first to know something about friction. Friction, or the reduction of friction, is the basic reason for lubrication. Friction is an everyday part of life, and it works both to man’s advantage and disadvantage.

Without friction, perpetual motion would be a reality. However, walking would be an impossibility, and life as it is presently known simply could not exist.

There are various types of friction. Dry friction is the result of movement of one solid body across another. A sled, a piston sliding in a cylinder and a log being dragged on the ground are all examples of dry friction. The resistance to motion is caused by the rubbing and interlocking of tiny projections on the surfaces of all solid bodies. These projections are very apparent on a rough timber or brick, but they also can be seen under a microscope on the most smoothly polished metal.

There is one fact about friction which becomes evident immediately. It takes work or energy to overcome it, no matter what form the friction takes. Whether it be dry, sliding, rolling, or even fluid friction, some amount of energy is required before motion can take place. A simple definition of friction, therefore, is “resistance to motion.” In lubrication, we are principally concerned with dry or sliding friction and fluid friction.

Fluid friction is possibly the most important in the field of lubrication, because most of our lubricants are fluid. When solid surfaces are separated by means of a fluid, the form of friction changes from dry to fluid friction. For example, dragging a rowboat across the beach is extremely hard work, but if the boat is pulled off the sand onto water, then it can be moved quite easily. We have lubricated the sand and the boat and separated them by a fluid film.

Fluids cause very little friction because they are composed of easily separated smooth particles. When a fluid lubricant is used between two solid surfaces, these particles fill up the spaces between the projections and, in effect, smooth out the solid surfaces.

A definition for lubrication might be “the substitution of fluid friction for dry friction.” This, of course, is not true with solid film lubricants; but for our purpose of generally dealing with oils and greases, it is a satisfactory definition. The particles of a fluid resist being sheared or separated to some degree, and this resistance to being separated is called fluid friction.

In addition to being cohesive, an oil must be adhesive. It must stick to metal or have the ability to wet metal. This combination of cohesion and adhesion in oil is what makes it resist being squeezed out of a bearing. The two determine whether the lubricant will maintain an unbroken oil film between rubbing surfaces.

From the foregoing discussion, the first rule of lubrication becomes obvious. It is – “Use the lightest possible weight of oil.” In other words, the best lubrication and the least amount of fluid friction will come from the thinnest oil which has sufficient film strength to carry the load.

The amount of power consumed by friction would not seem to be very much, but this is not always true. A drop of engine oil can stop a watch completely, because the power developed by the watch is not sufficient to overcome the fluid friction of an engine oil. In fact, many series of tests with automotive engines show a surprisingly great amount of power used, simply to overcome the internal friction.

A – The journal is stationary and rests on the bearing at the bottom centre. 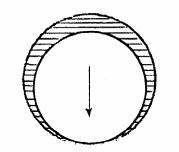 B – When the journal starts to rotate, it tends to move up the slope of the bearing.

If the clearances are filled with liquid, any that adheres to the journal will be dragged into the area where the journal rests on the bearing, and because of the basic properties of liquids, this adherent layer will bring more liquid with it. This fluid acts as a wedge and lifts the journal away from the bearing. This wedging action pushed the journal up to where equilibrium is reached between the weight of the journal and the upthrust of the fluid.

C – Finally, the journal will be running approximately in the position shown below.

This total separation of the two surfaces is called hydrodynamic or full film lubrication. This is what all machine designers try to insure in the operation of any mechanism.

VISCOSITY – Some knowledge of the liquid lubricants is necessary to understand how the lubricant wedge is built up. Mineral oil is composed of a very large number of particles or molecules. A single drop of oil may contain 5×10’6 molecules. They essentially remain as a mass and react collectively as a body to an applied force.

The molecules of oil are attached to a solid surface as well as being attracted to each other, so a layer will adhere to a moving metal surface and at the same time carry along other molecules in layers away from the surface. So, in fluid film lubrication, the original friction between metals is replaced by a new form of resistance, the one which is due to the properties of the oil. This is a viscous friction caused by the relative movement of the oil particles and is known as fluid friction, oil drag or the oil’s viscosity.

Viscosity should be the first consideration in choosing a lubricant for an application. While compromises are often made for reasons of simplicity, economy, etc., viscosity should be suited to the speed and load to result in the least amount of friction.

Heavy oils develop greater pressure than light oils and will support greater loads. Increased viscosity is due to larger molecules, greater attraction between molecules and greater difficulty in separating from each other or sliding past each other. If a thinner oil is used, then an increase in load can be tolerated if there is also an increase in speed. Essentially, increased journal speed gives the molecules of the light oil less time to escape from the wedge. The minimum viscosity for any application may be calculated from the speed and dimensions of the bearing and the load, but in critical cases it is often arrived at experimentally.

The viscosity change with temperature also shows when a machine runs for long periods of time at a steady ambient temperature. Some energy is used in fluid friction, and such energy is trans-formed into heat. The bulk oil temperature rises, and the oil thins out. Equilibrium is reached when the frictional heat generated is balanced by the heat dissipation from the machine. The effect is most marked at high speeds. If we try to compensate for this thinning out by using a heavier oil, the true increase in viscosity in use will be less than expected. This is because the thicker oil has more fluid friction, and the oil temperature will rise even higher to equilibrium. This temperature is undesirable.

Heavy oils are seldom used for high-speed operation because of this fluid and consequent temperature increase. In low speeds, the energy required to overcome the fluid friction of the lubricant is of less significance, so a thick oil heats up much less. Here the viscosity difference persists in use and the somewhat greater load carrying ability of the heavier oil can be utilised.